My mum died five years ago today.  I've written her this letter.

So much has happened since you crept gracefully out of life.   I know you’ll be ecstatic that I finally mustered up the courage to walk away from that relationship that was so damaging to me, that you knew has become a mirror image of your marriage.  After you died I tried many things to fix it but in the end I knew that to stay with him would be like a betrayal of you.  So I left and it was the best decision of my life.  You’ll be proud of me, I think, for doing the thing you were never quite able to do. 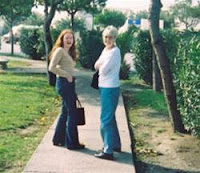 I’ve started singing.  I know!  I wish you’d lived long enough, and been well enough, to come and see my choir.  It’s been a lifeline for me and I now understand how singing was such an emotional outlet for you, a release of all the feelings you took care to hide from everyone.  When illness took away your singing voice I saw how painful it was for you; now I understand something of how soul-destroying that must have been.   I would love, so much, to be able to sing with you.   Oh, that we could have the chance to do it.

I cook like you.  Throw it all in, one pot dinners.  My spaghetti bolognese and moussaka taste like yours but I’ve never managed to match your roast potatoes – although let’s be honest, no one could ever match your roast potatoes.   I can never eat cheese on toast (with seasoning salt, of course) without thinking about you, with a smile.  The same goes for chicken noodle soup, our comfort illness food.

I’ve had a horrible year, mum.  I’ve wanted more than anything to curl up on your lap at your end of the sofa and have you make it all better; there were times when I thought about coming to find you in the sweet hereafter or wherever you may be.   I know you’ll understand that, I think you felt that way more often than you ever said. You knew there was a dark shade to me and without you to talk to about it I’ve felt lost.  I’m coming through the other side of it now. Being a strong woman is as much my strength and yet my weakness as it was for you and I’m learning when to ask for help, and accept it.  I’ve learnt so much from what you did and couldn’t do. 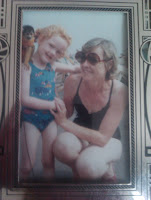 I wish you could have known B.  You’d like him ever such a lot.  He’s even got me interested in gardening, so maybe I have got your green fingers after all.  He makes up silly songs and I can just picture the two of you together in your garden, pottering about among the hardy perennials swapping ever-more ludicrous rhymes!  Yesterday he said “even if you don’t believe in god, you can still believe in magic.”  I think you’d love that as much as I do.

When you died I was terrified I’d never be able to remember you as you were before illness, but I do, and I feel happy at these memories more than I feel sad.  I have this picture up in my bedroom, you and your funny, shy little shadow.  We had such good times you and I.
Posted by Bear Faced Lady 20 comments:

Being poor sucks. Really sucks.  And I don’t mean poor as in you can’t afford to go out as often as you’d like, you’re not having a holiday this year, you’re not earning enough to justify a haircut.  I mean poor as in you’re getting red letters from all your creditors, you weigh up every bus fare against buying bread and milk, you really don’t know how you’re going to pay your household bill this month, next month, every month. And knowing that part of the reason you’re so poor is because you have an illness that takes away your ability to manage any kind of personal care or circumstances really sticks the knife in.

I’ve never been that good with money (Savings? Huh?)  but I’ve always managed to keep on top of any debt I had until now.   I’m unemployed after being forced in December to resign from my job due to an investigation into claims I was faking depression. It’s a long, sorry tale which I’ve blogged about before so I won’t go into the detail here. Suffices to say, I’m out of work and no one seems in any way keen to interview me.

I’ve just had my Job Seekers Allowance cut because I missed an appointment.  I missed an appointment because I got four days’ work for which I will get paid about £600 at some point in the future. I did try and inform the Jobcentre by email of the circumstances (I couldn’t phone as it was a Bank Holiday weekend and I was working 15 hour days) but nevertheless my allowance has been taken away.  This means that my monthly income is £320 Housing Benefit which is for my rent (it obviously doesn’t cover it) and £8.71 per week Council Tax Benefit.  I’m not going to disclose how much I owe to the red letter senders – frankly it’s none of your business! – But clearly, they ain’t getting paid any time soon.

Because I’ve been so ill with depression, my natural tendency to keep a grip - albeit a tenuous one - on my finances has gone to pot.  It’s not been so much burying my head in the sand as being so out of focus with things that they have just not even registered. My memory is terribly affected by depression. I just don’t remember to do stuff.   And now I’m surrounded by letters and getting the dreaded 0845 phone calls and I don’t quite know where to start.  Having my JSA cut has knocked me right back; I’ll be honest, I could have sorted it out a couple of weeks ago but I was already slipping, I’m having more and more frequent depressive symptoms.  I am terrified of going back to where I was at the end of last year but the curse of depression is that I just don’t feel able to do anything about it. And so we’re back to the chicken and egg.

I can imagine that to some people this just reads like a list of excuses for being crap with money; it’s really not. Depression plays Russian roulette with your mind. It takes a wrecking ball to your sense of priority and gives your memory a right old kicking.  When leaving your room to go to the toilet is Mount Everest, than having to interact with people you feel over-burdened with guilt about owing money to becomes an impossible mountain to scale.

This morning I have been looking on the website www.nationaldebtline.co.uk and I think it might just be the thing that will help me get a handle on things, so that is a step in the right direction.  I am going to look into getting an advocate to help me contact the companies I owe money to.  I can’t do this alone. And for once I am going to ask for help, which as any depressive knows, is often the hardest thing of all.
Posted by Bear Faced Lady 13 comments:

What I've written about

When I wrote it

Read these people. They are good.